Official presentation of the Senior Masters Cup in Marbella

The city of Marbella will host the best tennis of all times from the 22nd to 24th September. John McEnroe, Yannick Noah and Mats Wilander will be the main stars of the Senior Masters Cup, which will take place in the heart of Marbella Golden Mil, the Puente Romano Tennis Club. These three magnificent players will be followed by Albert Costa, Sebastian Grosjean and Younes El Aynaoui. 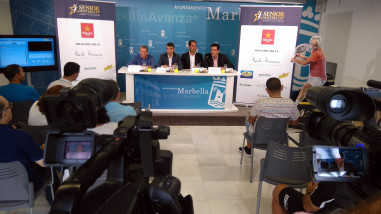 “It´s an honor for Marbella to host such an event in September. To bring players like John McEnroe, Yannick Noah and Mats Wilander to the city, it´s undoubtedly a unique opportunity for people to enjoy”, said José Bernal, major of Marbella.

“To bring again these three players to the city of Marbella is for us such a privilege. The Senior Masters Cup is born with the aim of establishing itself in Marbella and becoming one of the top social and sports event of the city”, mentioned Albert Costa, tournament director.

Don´t miss the opportunity to see the great legends play against each other, buy your tickets through the official channel of El Corte Inglés (web: www.elcorteingles.com – or by calling 902 22 44 11).

You can also find all the information about the tournament at the official website www.seniormasterscup.com.

From Saturday October 8th onwards the Antwerpers, tourists and commuters will be surprised when they walk out of the Central Station in Antwerp. For the occasion of the European Open, the only ATP World Tour tournament in Belgium which will take place between October 17th and 23rd at the Lotto Arena, there will be a practice court installed on the Astrid Square. Tennis stars like David Goffin, David Ferrer and Richard Gasquet will be able to hit some balls watched by many passengers before starting the real job.

Especially for the official opening of the practice court there will be a Guinness world record attempt which will try to break the world record of the largest number of consecutive singles tennis matches played by one person. The previous record is currently held by Mike Mitchell (UK), who played 36 matches over a period of 34 hours last year at Wimbledon.

The Kim Clijsters Academy will be the partner of this world record attempt. As an ambassador for SOS Children’s Villages, our compatriot is happy to support this initiative for which all profits will go to the association. The organizers aspire to collect the sum of 25.000 euro for the construction of a new sports ground in the SOS Children’s Village of Trjavna in Bulgaria. Kim Clijsters will ask some of her contacts in the world of tennis and famous persons for help in order to achieve this world record. Kim Gevaert, Karl Vannieuwkerke and Guga Baul have already confirmed their participation. 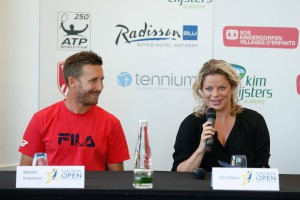 Maxime Braeckman (31 years old) is the player who will take up the challenge on October 8th. He is no stranger to the world of tennis. Braeckman won three times the Belgian circuit, travelled around the world as a sparring partner of Xavier Malisse and coached Kirsten Flipkens. Since 2012 he is a coach at the Kim Clijsters Academy for which he accompanied, among others, young talents Lara Salden and Seppe Cuypers on the ITF junior circuit.

“I will do my utmost to beat the current record!”, Braeckman looks forward ambitiously. In order to achieve that, I have to play a minimum of 37 consecutive matches and it will be difficult both mentally and physically. I started my preparation this summer. My stamina will be put to the test, so I will play some overnight warm-up matches.” As a reference: the previous record took 34 hours to complete, a veritable war of attrition as the challenger can rest only 5 minutes per hour.

Anyone who wishes to support this Guinness World Record attempt can contribute an online donation via this link:
http://bit.ly/SupportMaxime4SOS

In addition to the money raised through this way, Tennium – the organizer of the European Open – and the tournament sponsors will also financially support this attempt.