Richard Gasquet captured the title at the European Open on Sunday, fighting past Diego Schwartzman 7-6(4), 6-1.

Gasquet notched his 14th ATP World Tour title and second of the year, having previously lifted the trophy in Montpellier in February. He needed one hour and 29 minutes to emerge victorious, saving one of two break points faced, while converting three of six of his own. The Frenchman was ruthless on his first serve, claiming 29 of 33 (88 per cent) of such points.

Both players looked to blast through the indoor hard court at the Lotto Arena, unloading from the back of the court. Two scintillating backhand winners by Schwartzman punctuated the start of the match, as the Argentine sought to carry the momentum after saving two match points over top seed David Goffin in Saturday’s semis.

Schwartzman may be short in stature, but his diminutive height is not proportional to his heart. After falling behind an early break, the 24 year old dug in his heels when staring down three set points at 5-4 40/0. He would save them all, reeling off seven consecutive points to break back and consolidate for 6-5. Schwartzman would force a tie-break, where Gasquet’s would not be denied a second opportunity to close out the opener.

“It was a tough match, especially in the first set when I leading 5-4 40/0 on my serve,” said Gasquet. “It was important for me to win the tie-break and I took a lot of confidence into the second set. It was a great match for me and I was the favourite to win, so it’s important for me.
“I’m very happy with the week. All the matches were tough and there were a lot of great players here. It’s always nice to have a title.”

As the match wore on, the Frenchman’s experience proved to be a critical factor. Gasquet launched his one-handed backhand with a bevy of topspin to drive the Argentine behind the baseline, and he would drop just one game in the second set to pull away for the title.

Schwartzman was bidding for his second ATP World Tour title in his second final. He captured his maiden title on the clay of Istanbul (d. Dimitrov) earlier this year. The Argentine enjoyed a successful week in Antwerp, having stunned top seed David Goffin in Saturday’s semi-finals, saving two match points.

Gasquet, Schwartzman battle from the brink to set final duel

A pair of thrilling comebacks marked Semi-final Saturday at the European Open in Antwerp, as Richard Gasquet rallied from a set and a break down to defeat Kyle Edmund and Diego Schwartzman saved two points to stun home favourite and top seed David Goffin.

Edmund was on the cusp of becoming the fourth member of the Next Generation contingent to reach a final in just the past five weeks, leading 4-2 in the second set, but Gasquet stayed the course and refused to surrender. Edmund burst out the blocks in the opener, breaking to love in the sixth game, and took the lead in the second with an immediate break for 1-0. As the match wore on, the Brit’s energy level dipped and Gasquet grabbed in the initiative, breaking back for 4-4 as an Edmund forehand found the net.

Serving to force a second set tie-break at 6-5, Edmund struck his first double fault to give Gasquet three set points. The Frenchman would seize the opportunity, forcing a decider and converting the decisive break for 3-1 with a sublime backhand down the line.

Gasquet will appear in his third ATP World Tour final of the year, having prevailed in Montpellier (d. Mathieu) and finished runner-up earlier this month in Shenzhen (l. to Berdych). Either top seed David Goffin or Argentina’s Diego Schwartzman awaits on Sunday.

Edmund, meanwhile, enjoyed his biggest result on the ATP World Tour in reaching his first semi-final. He notched his fourth Top 20 win of the year in upsetting David Ferrer in the second round.

In Saturday’s second semi-final, Diego Schwartzman pulled the upset of the tournament in stunning top seed and home favourite David Goffin 7-5, 2-6, 7-5. The Argentine saved two match points with Goffin serving for a spot in the final at 5-4 in the decider, eventually rifling a backhand winner to draw level. He would proceed to reel off 10 of the last 11 points, breaking to love to seal the win after two hours and 23 minutes.

“It was amazing for me,” said Schwartzman. “It’s my second time here in Belgium. The last time was in Davis Cup when David beat me last year. Today I played really well. It was a tough match.”

Schwartzman overturned an 0-11 mark against Top 20 players with the victory, booking a spot in his second ATP World Tour final. He previously defeated Grigor Dimitrov for the Istanbul title earlier this year. On Sunday, Schwartzman will meet Gasquet for the first time.
“Richard is a great player. He’s Top 10 and very talented. I need to recover and be ready for the final.”

Pierre-Hugues Herbert and Nicolas Mahut, the No. 1 team in the Emirates ATP Doubles Race To London, advanced to their ninth final of the season Saturday in Antwerp. The French duo downed Dominic Inglot and Andre Sa 6-3, 6-2.

Top seed David Goffin made a strong start at his home tournament’s inaugural event with a 7-5, 6-4 win over Florian Mayer on Thursday at the European Open. Goffin stands at No. 10 in the Emirates ATP Race To London and looks to qualify for the Barclays ATP World Tour Finals for the first time.

The 25-year-old Belgian capitalised on five of his nine break point chances in the 74-minute match as he advanced to the quarter-finals, where he will face qualifier Marius Copil. The Romanian advanced to the last eight with a 7-6(3), 6-2 win over home hope Steve Darcis.

NextGen star Kyle Edmund, who is at a career-high No. 43 in the Emirates ATP Rankings, continued his banner year with an upset over second seed David Ferrer. The 21-year-old Brit saved seven of 11 break points faced in his victory over the Spaniard, which took just over two hours. He next faces Italian Andreas Seppi as he bids for a first ATP World Tour semi-final.

Diego Schwartzman got the better of NextGen star Taylor Fritz, winning 6-4, 6-4 in 72 minutes for a quarter-final clash against fourth seed Pablo Cuevas.

Barclays ATP World Tour Finals qualifiers Pierre-Hugues Herbert and Nicolas Mahut advanced to the semi-finals with a 6-7(4), 6-4, 10-5 win over Federico Delbonis and Diego Schwartzman. They will challenge Dominic Inglot and Andre Sa, 7-5, 3-6, 11-9 winners over Pablo Cuevas and David Marrero.

Fourth seed Pablo Cuevas struck 11 aces to move past qualifier Jozef Kovalik 6-4, 7-6(4) on Wednesday and reach the European Open quarter-finals in Antwerp. He will meet Diego Schwartzman or NextGen star Taylor Fritz, who won 80 per cent of his first-serve points and came back to beat wild card Joris De Loore 3-6, 6-4, 6-4. 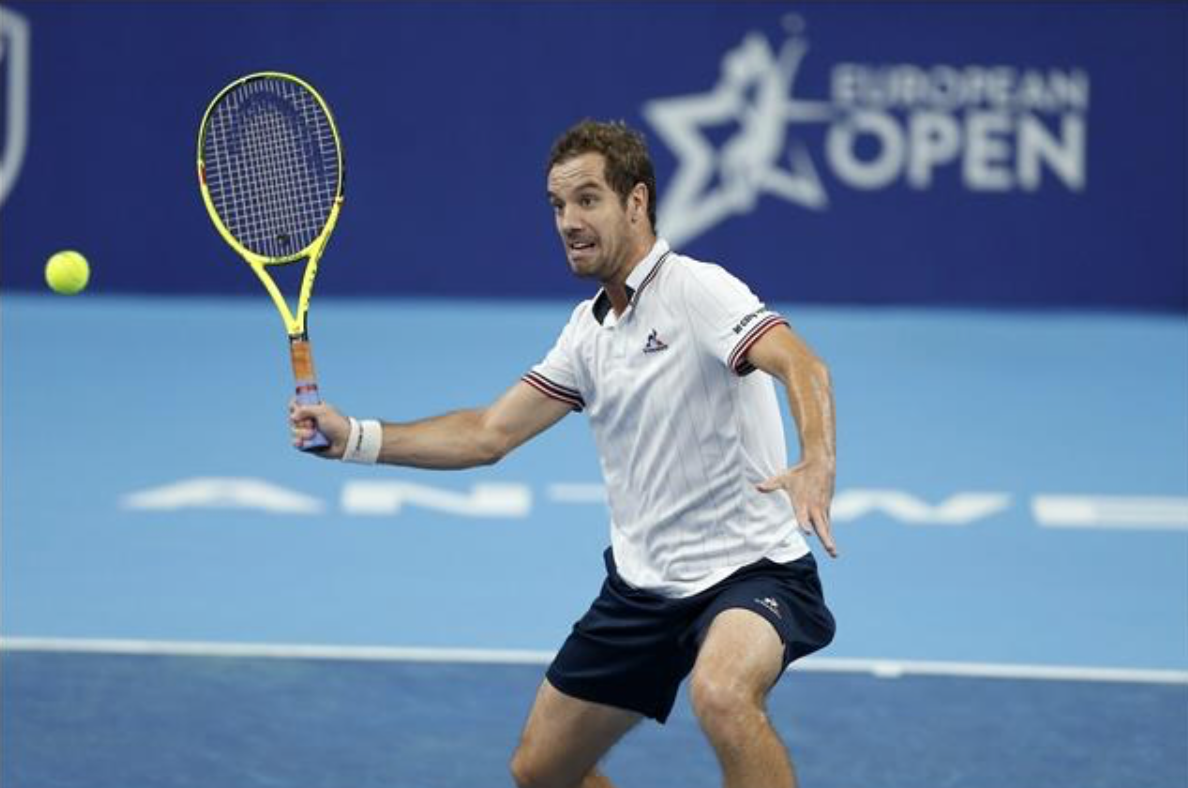 Top doubles seeds Pierre-Hugues Herbert and Nicolas Mahut needed only 52 minutes to prevail against Guillermo Garcia-Lopez and Nenad Zimonjic 6-0, 6-3. Herbert/Mahut are looking to gather momentum heading into the Barclays ATP World Tour Finals, to be held 13-20 November at The O2 in London. The Frenchman will be playing at the year-end championships for the second consecutive year. 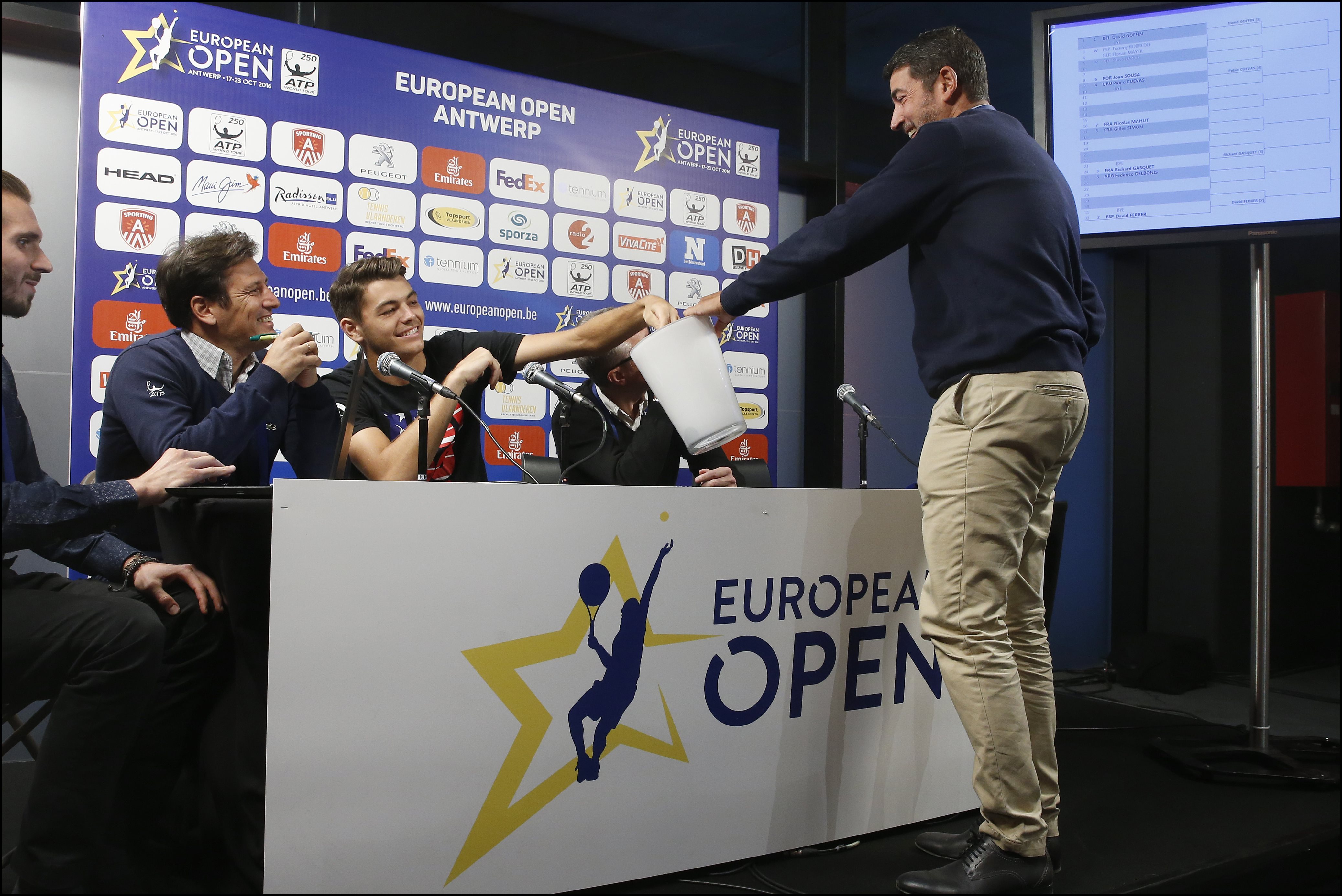 This Saturday was held the draw for the singles and doubles draws of the European Open. David Goffin (ATP 12) and David Ferrer (ATP-15) are exempt from the first round. Other Belgians will not have it easy.
Steve Darcis (ATP-115) will play its first round against Benoit Paire (ATP-47) and Joris De Loore (ATP-184), meanwhile, will play against the rising star of the US Taylor Fritz (ATP-71).
The winner of the duel between Tommy Robredo (ATP-457) and Florian Mayer (ATP-58) will meet Goffin in the second round.
Below you can find the singles draw. 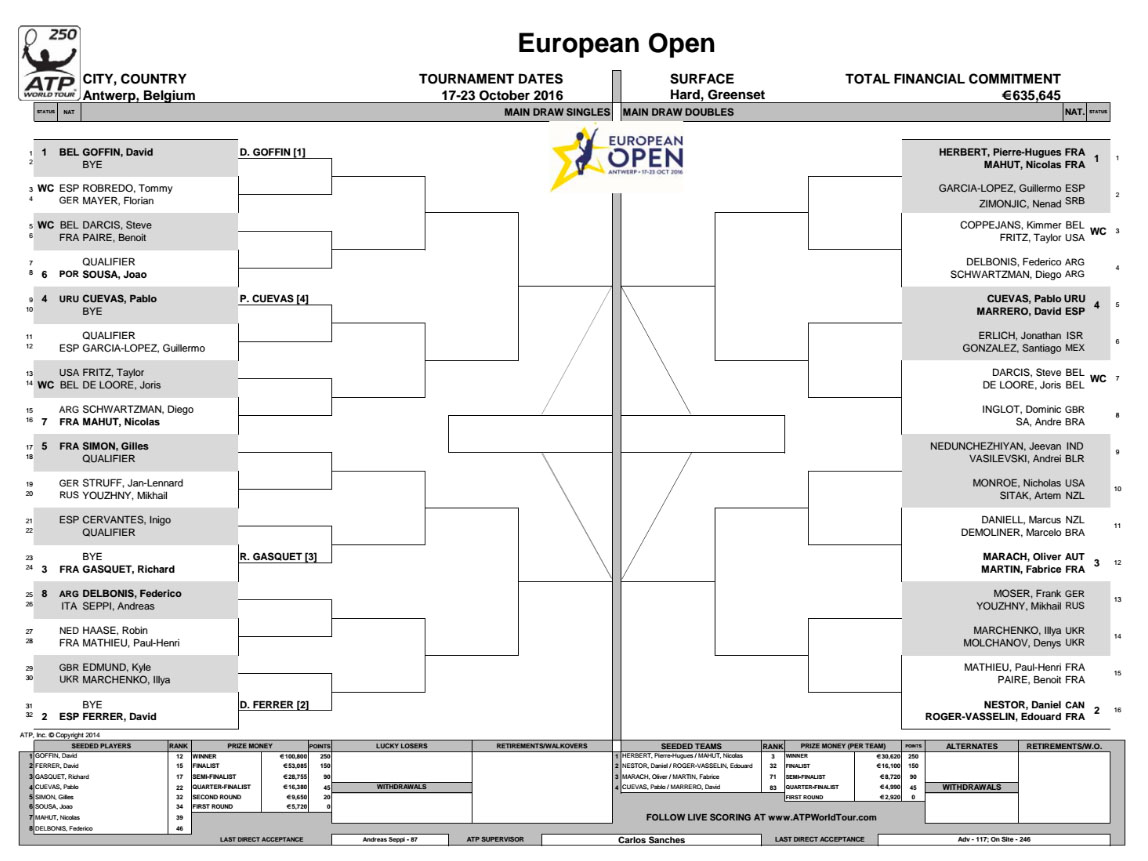 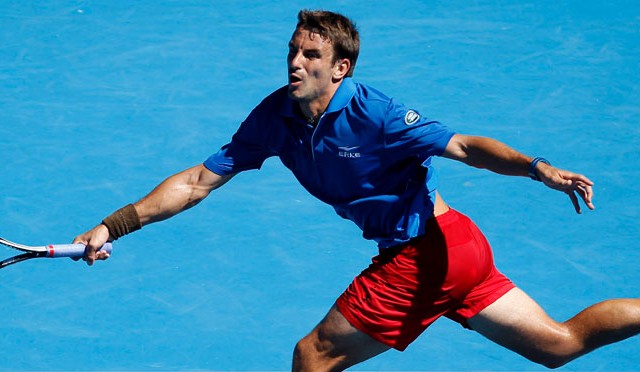 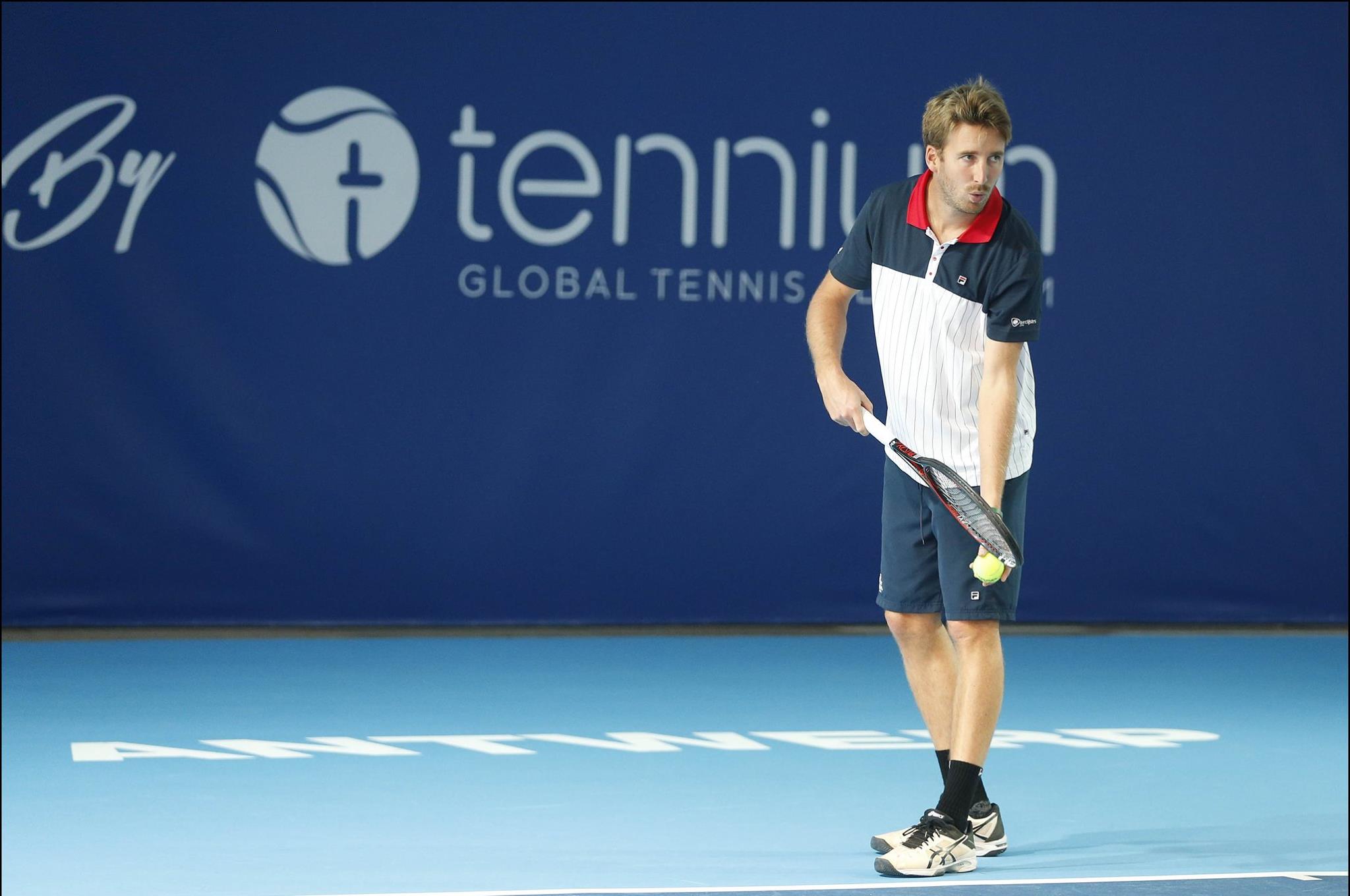